WOW is hosted by Breaking The Spine. This week I decided to go with a book that I haven't seen too many people mention: 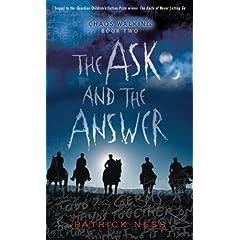 Reaching the end of their tense and desperate flight in THE KNIFE OF NEVER LETTING GO, Todd and Viola did not find healing and hope in Haven. They found instead their worst enemy, Mayor Prentiss, waiting to welcome them to New Prentisstown. There they are forced into separate lives: Todd to prison, and Viola to a house of healing where her wounds are treated. Soon Viola is swept into the ruthless activities of the Answer, aimed at overthrowing the tyrannical government. Todd, meanwhile, faces impossible choices when forced to join the mayor’s oppressive new regime. In alternating narratives — Todd’s gritty and volatile; Viola’s calmer but equally stubborn — the two struggle to reconcile their own dubious actions with their deepest beliefs. Torn by confusion and compromise, suspicion and betrayal, can their trust in each other possibly survive?

This book is the second in the Chaos Walking Trilogy. The first book, The Knife of Never Letting Go came out last year. It's a really great story set in the future about a boy, Todd, raised in a town of all men. The town is on a new planet they had been sent to colonize, but when they got there they found it was inhabited, and the inhabitants unleashed a virus that makes all men's thoughts hearable by everyone. As in, everything they think is said outloud, as if they're speaking it. They call this Noise, and it only affected the men. Todd, the last baby born in the town, has been led to believe that all the women on the planet died of disease when he was a baby. But did they? Or is it something much worse? It sounds complicated and strange, but it's really a really great book. Despite the fact that it's set on a new planet in the future, the towns are very much like the old west. There is action and adventure and suspense and possibly a little romance. I highly recommend reading The Knife of Never Letting Go, and then getting it's sequel, The Ask and The Answer. I can't wait to read it!

I haven't read the first book, but I may have to. This one sounds really interesting. Great pick!

You should definitely check it out! It's a great read, and not like anything else I've read lately.

Oh, this sounds really good! I haven't read the first one either but I may have to now, thanks!

Definitely check it out! I hope you like it as much as I did!