Before I started writing YA, I was (and still am) an indie filmmaker. I write, direct, film, and edit and quite frankly with all the time I've spent working on my book, I worried those skills might be getting a little rusty. Fortunately, Carrie Harris was there to help!

You might have seen Carrie and I tweeting a while back about a Secret Project. Well,this is it. I shot, and edited the trailer for Carrie's debut novel BAD TASTE IN BOYS and now after much computer drama, I can finally present it to you! So without further adieu, BAD TASTE IN BOYS - The Trailer!

I had so much fun, I want to do it again! So if you're in need of a book trailer, let me know!
Posted by Valerie Kemp at 11:40 AM 7 comments

I got my Nine Paths To Chloe King game kit today! It came in a gorgeous wooden box complete with the custom iPad 2! It's so cool! It has special apps just for the game. And the rest of the items are very mysterious. (There was even a message from A from Pretty Little Liars letting me know she's still watching me! 0_0) Check it out!

And before I forget, I told you that you'd be able to play along too. ABC Family has it set up so you can join the game, and get a chance to win lots of free stuff, (right now they're giving away the circle charm you see in my box!

To claim one, enter the code word CIRCLE in the box under the "Latest Giveaway Item".) and the Grand Prize is a visit to the set of The Nine Lives of Chloe King! GO HERE to claim a gift and to start playing. 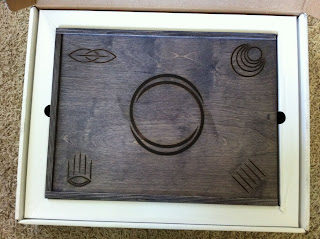 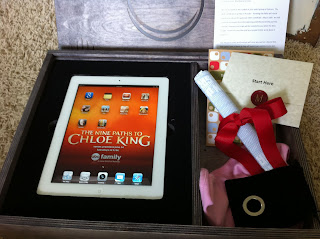 Some of the things here include: a birth certificate written in Russian, with a secret hidden message in it, a pink baby bib, a circle charm, and a wax sealed note that pointed me to my first clue! 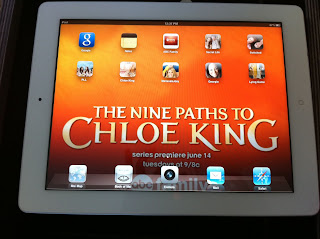 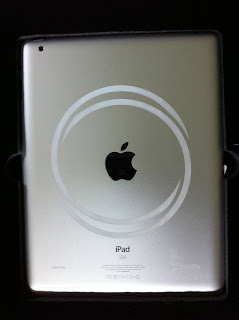 And here's a peek at the Mai Uniter scroll we received today! (Click to enlarge.) 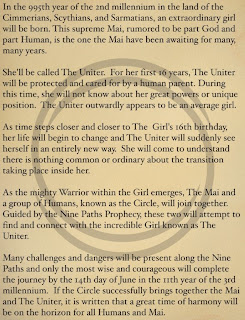 I just wanted to take a moment and celebrate the release today of Tessa Gratton's debut novel, BLOOD MAGIC. Not just because Tessa is an awesome person I've been fortunate enough to get to know in the last year (she is) but because BLOOD MAGIC is an AWESOME book and you NEED to read it NOW. Check it out: 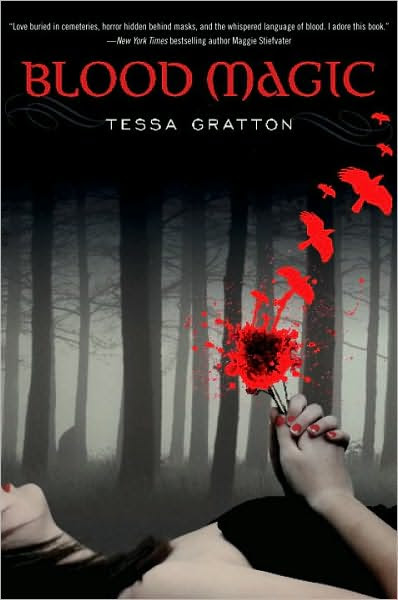 Everywhere Silla Kennicott turns she sees blood. She can't stop thinking about her parents alleged murder-suicide. She is consumed by a book filled with spells that arrives mysteriously in the mail. The spells share one common ingredient: blood, and Silla is more than willing to cast a few. What's a little spilled blood if she can uncover the truth? And then there's Nick—the new guy at school who makes her pulse race. He has a few secrets of his own and is all too familiar with the lure of blood magic. Drawn together by a combination of fate and chemistry, Silla and Nick must find out who else in their small Missouri town knows their secret and will do anything to take the book and magic from Silla.

Why You Should Read This Book: First let me say, don't let the title fool you. There are no vampires (or any other paranormal creatures) in this book! What there is in this book is lots of magic, (it's so real that you can see it like a movie, and you'll want to try it just to see if there's magic in your blood too. Or... maybe that's just me.) There's also steamy kisses, a peek into a fascinating descent into evil, a real girl with real problems who doesn't need a boy to save her, steamy kisses, and my most favorite thing in a book, a plot that keeps you on your toes and guessing all the way until the very end! (And did I mention steamy kisses?) I really loved this book and the world created in it. I'm already salivating for the companion novel!

So if you haven't added BLOOD MAGIC to your must read list you're in luck BLOOD MAGIC is in stores right now! AND I might be giving away a copy soon, you just never know!
Posted by Valerie Kemp at 9:29 AM 1 comments

The Next Buffy? Summer TV Fun!

You might remember that around this time last year I was invited by ABC Family to be a Pretty Little Liars Secret Keeper. Those of us selected were sent special phones where we received messages from the mysterious A who had us doing all kinds of fun stuff in order to protect our secrets. It was truly one of the most amazingly put-together and FUN games I have ever played. And for an awesome show.

Well, this year ABC Family has outdone itself. I've been invited to play The Nine Paths of Chloe King a game tied to to their new series The Nine Lives of Chloe King And this year, instead of sending me a special phone to play the game, they're sending me a custom ipad 2! Yes, really! I almost passed out when I read that. They're calling it a MaiPad because we will be playing as members of the ancient and mysterious Mai race.

And the best part is that this year everyone will be able to play the game too. (Albeit without the ipad.)

So what is The Nine Lives of Chloe King about? I wondered that too. It's based on a trilogy of books by Liz Braswell that came out a few years ago. 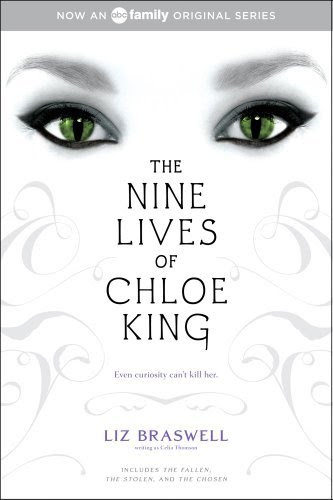 Chloe King is looking forward to celebrating her birthday with her friends and single mother, just like every other year…that is until she starts developing heightened abilities and discovers she's being pursued by a mysterious figure. Chloe soon learns she's part of an ancient race which has been hunted by human assassins for millennia —and that she may be their only hope for ultimate survival.


The Nine Lives of Chloe King premieres June 14th at 9pm, right after the summer premiere of Pretty Little Liars. Until then, don't be surprised if you see making a lot of tweets, blog posts, and facebook updates involving the show. The game runs 5/24-6/14.

Is anyone else playing? Can't wait to meet you all!
Posted by Valerie Kemp at 10:23 AM 5 comments

One of my favorite quotes ever (and unfortunately I can't remember where I heard it, a movie I think) is:

"If you're going to fail, fail spectacularly."

And no, that doesn't mean do a crap job. It means go for it. Don't hold back, or play it safe, in the hopes that you won't make a huge fool of yourself if you get it wrong.

If you shoot for the middle, all you'll get is mediocre. That and the knowledge that you could've tried harder but you didn't.

So the next time you sit down to write, or work out a plot, or anything else in life, ask yourself. Am I doing everything I can to make this great? Am I trying to make my story fit in with what everyone else is doing?

Is there a crazy idea you have for a story that in your gut, you know it could work, but you're afraid to try it? Are you shoving it aside to write something more mainstream/"now"/generic? Ask yourself it that's really what you want to do, and if it's not, go for it. And even if you fail, it will be the kind of glorious failure that shows your heart, and what's wrong with that?
Posted by Valerie Kemp at 11:06 AM 10 comments

The Road To Success

Today I'm going to point you to an article I read recently and found very helpful:

Halvorson points out that most of us have a hard time figuring out what it is that makes us succeed when we succeed and therefore that makes it hard for us to repeat the process on each new project or goal. I had never thought about it this way but I think it's so true. When things go surprisingly well, we tend to think we "got lucky" but I truly believe that LUCK = PREPARATION + OPPORTUNITY so that means it's got to be more than just showing up, right? But rarely do we stop and ask ourselves why something we did worked. We just rejoice in it.

One of my favorite things on the list is: Focus On Getting Better Rather Than Being Good

Such a good idea, and SO hard to stay focused on. So if you've got a few minutes, I highly recommend checking out the link!
Posted by Valerie Kemp at 11:24 AM 0 comments

In Which I Attempt To Shame Myself Into Writing

So you might be aware, from some of my (sparse) recent posts that I'm starting a new book. Or, attempting to start one, anyway. I have an idea that I'm very excited about but it's a bit daunting in it's complexity and so rather than writing, I've been making lots and lots of notes. And staring into space. And sighing.

I've come to the realization it's time now for me to man up and start putting real words on the page so I've decided the best way to make sure that I do this is to announce my goal publicly so that my fear of humiliation will keep me on task.

So here it is. This month, starting today, I intend to write a minimum of 1000 words every day on my WIP PARADOX (see, doesn't that title just sound complex?), for an end total of at least 30,000 words on May 31st. I'm putting up a little counter on my sidebar so that I can keep tabs on my wordcount each day.

Please feel free to harass me on twitter or facebook and ask if I've done my 1000 words for the day. I'll try to post on my progress, but I'm not sure anyone wants to read the melodrama about all the hair I'm tearing out while trying to get this done.

If any of you out there are looking to do something similar let me know. Maybe we can support each other.
Posted by Valerie Kemp at 11:54 AM 5 comments