It's a cloudy, muggy day, and I haven't spent an afternoon just laying around and reading in months, so I'm declaring today a reading day. I have SO MANY awesome books I've been dying to read just waiting for me to pick them up. The hard part will be deciding which one. Here's just a few that are calling me:

What about you? What are you reading - or wishing you could take the time to read - today?
Posted by Valerie Kemp at 12:05 PM 5 comments

I've been given the opportunity to giveaway a copy of the awesome new middle grade book The Girl Who Circumnavigated Fairyland in a Ship of Her Own Making by Catherynne M. Valente! Check out the trailer below:

More info:
"Twelve-year-old September lives in Omaha, and used to have an ordinary life, until her father went to war and her mother went to work. One day, September is met at her kitchen window by a Green Wind (taking the form of a gentleman in a green jacket), who invites her on an adventure, implying that her help is needed in Fairyland. The new Marquess is unpredictable and fickle, and also not much older than September. Only September can retrieve a talisman the Marquess wants from the enchanted woods, and if she doesn?t . . . then the Marquess will make life impossible for the inhabitants of Fairyland. September is already making new friends, including a book-loving Wyvern and a mysterious boy named Saturday.

With exquisite illustrations by acclaimed artist Ana Juan, Fairyland lives up to the sensation it created when the author first posted it online. For readers of all ages who love the charm of Alice in Wonderland and the soul of The Golden Compass, here is a reading experience unto itself: unforgettable, and so very beautiful."

This contest is only open to those with US and Canada mailing addresses. Sorry! To enter, just leave your name and email address (be sure to write it something like "yourname [at] gmail [dot] com" to avoid the spam bots!) Winner will be chosen at random on June 28th. I will email the winner. If I don't get a response in 24 hours. I will choose another winner.

There's no need to do anything for extra points, but if you want to spread the word to other MG lovers that would be great!
Posted by Valerie Kemp at 12:47 PM 22 comments 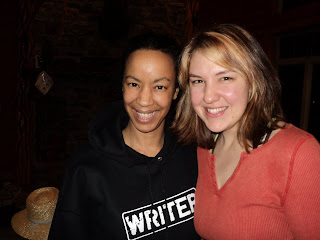 Natalie and I (me?) at the Branson Writer's Retreat

I am SO thrilled and so excited for her. Her book is amazing, and I can't wait for you all to read it!

In all the excitement Natalie has lost her mind decided to give back! And so, she's offering to crit the first 5k of every manuscript sent to her by tomorrow Friday, June 17th. Yes, really! All you have to do is send her your work and she will read it and give you some of her amazing (and sensitivity-level appropriate) feedback.

Get all the info HERE. But hurry, tomorrow's the last day to submit!
Posted by Valerie Kemp at 10:15 AM 3 comments

No Love For The Present?

Since I made the switch from screenwriting to novels, I've discovered that some people don't care for present tense. In fact some people have violent hate for present tense prose. I find this curious. I rarely notice tense when I'm reading and the times I do, it's usually because a book written in past tense has suddenly confused me as to when something is happening/has happened. (That whole, "I'm saying it in the past tense but it's really happening right now" thing hurts my brain.)

I'm sure you've had a conversation that went something like this:

"You won't believe what happened to me today!"

"So, I'm in the store and this guy comes up and is like, did it hurt? And I go, um, what? And he gives me this big cheesy grin and says, when you fell out of heaven? And I was like seriously??"

(Okay, hopefully you don't have conversations like this, but you get the point.) The story was told naturally in present tense because she's sort of reliving it. It makes the moment more immediate. So with this in mind, I am really curious what it is that those of you that hate present tense find so awful about it. I've read terms like "jarring" and "annoying" and I wonder what about it gives you those feelings.
Posted by Valerie Kemp at 10:07 AM 3 comments

Catching Up on Chloe King

I've been on vacation and have fallen behind on posting my updates on the NINE PATHS TO CHLOE KING game. So today you get a massive Chloe King post because THE NINE LIVES OF CHLOE KING premieres on ABC Family in just two days! (That's Tuesday June 14 at 9pm, after the Pretty Little Liars season premiere.)

First up, you can win a very awesome Protection Charm just like this one: 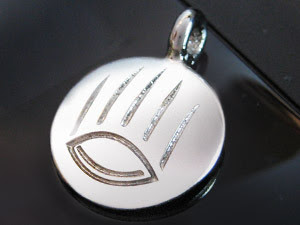 To claim yours, just go to the ABC Family Nine Paths game site HERE and enter the code word DECEPTION in the box on the right hand side, just under the photo of the charm. The first 500 people to enter the code by June 14th get a charm so hurry on over and claim yours!*

So what have I learned about The Nine Lives of Chloe King over the past two weeks?

Chloe King is The Uniter. Only she can save her people, the Mai. The Mai are an ancient race of people rumored to be part God (thanks to the Egyptian cat goddess Bastet) who have cat-like abilities.

This is the Mai symbol for foe: 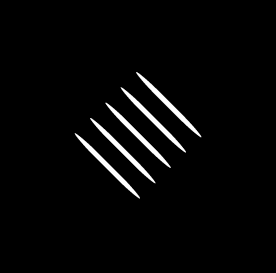 And Chloe's greatest foe is this mysterious man: 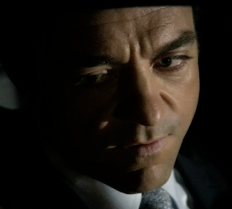 He wants her dead at any cost.

Poor Chloe just wants to be a normal girl. She even has a crush:

But with killers out to get her, and the fate of her race in her hands, it doesn't seem likely she'll get that chance.

I'm so excited to see this show! The ninth and final path begins Monday, I can't wait to see what it is!

NO PURCHASE NECESSARY. Open only to persons who are, as of entry, 18 years of age or older, legal residents of, and physically located within, the 50 United States or D.C. and who are bloggers or journalists specifically invited to participate by Sponsor. Starts May 24, 2011 once game boxes are received and ends on June 14, 2011 at 11:59:59 PM PDT. Void where prohibited. Click here for Official Rules Terms and Conditions and complete entry and prize details.
Posted by Valerie Kemp at 11:00 AM 1 comments